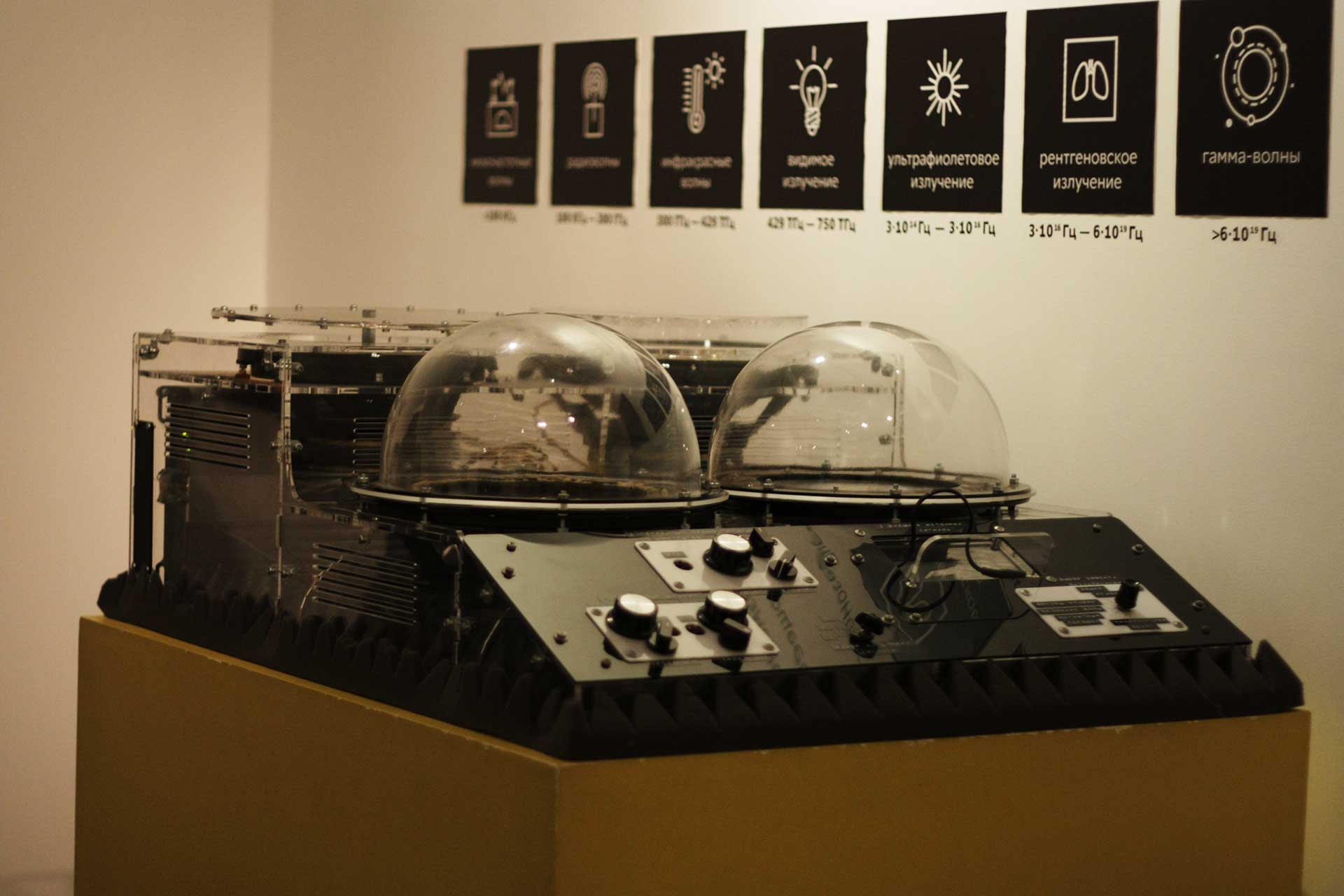 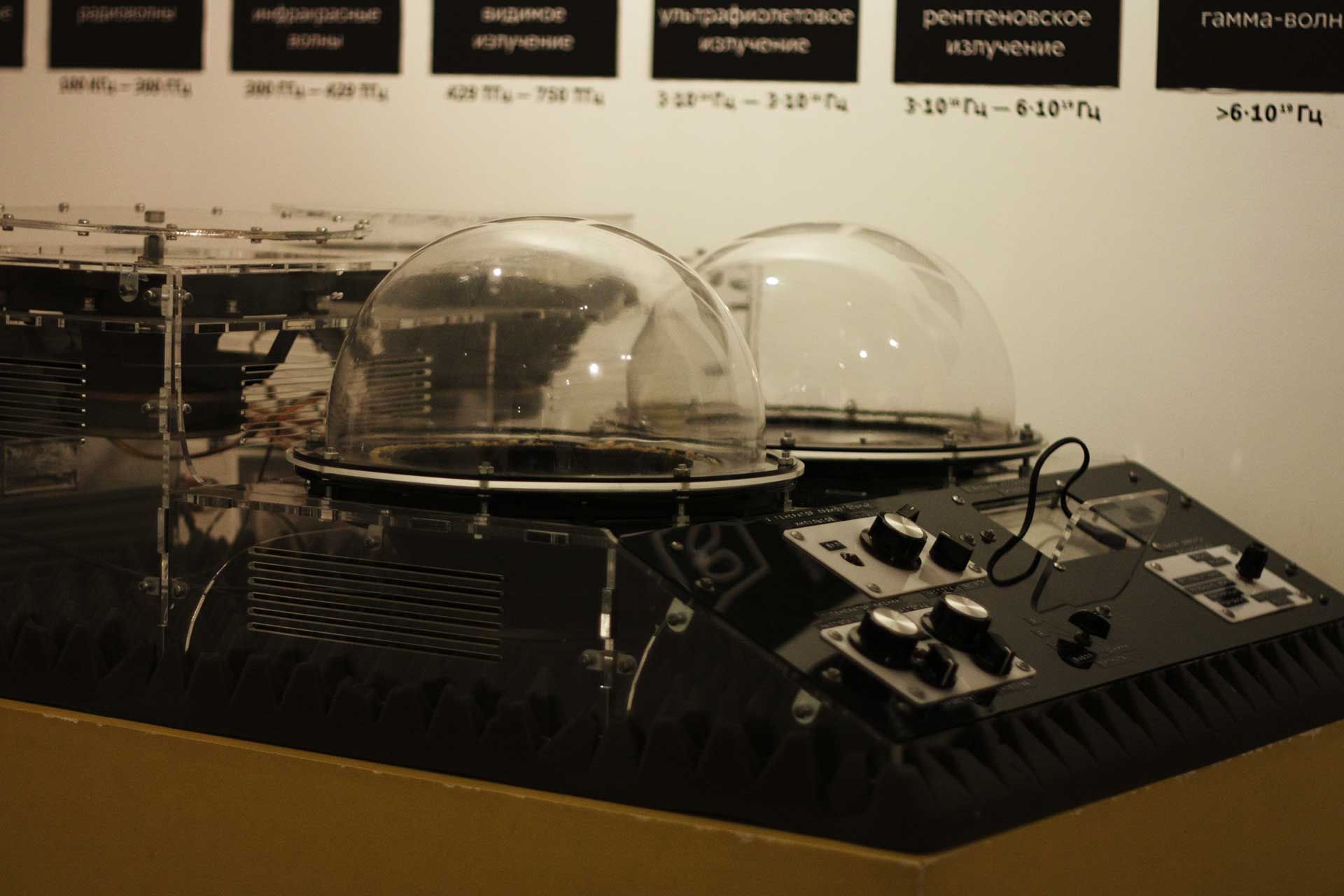 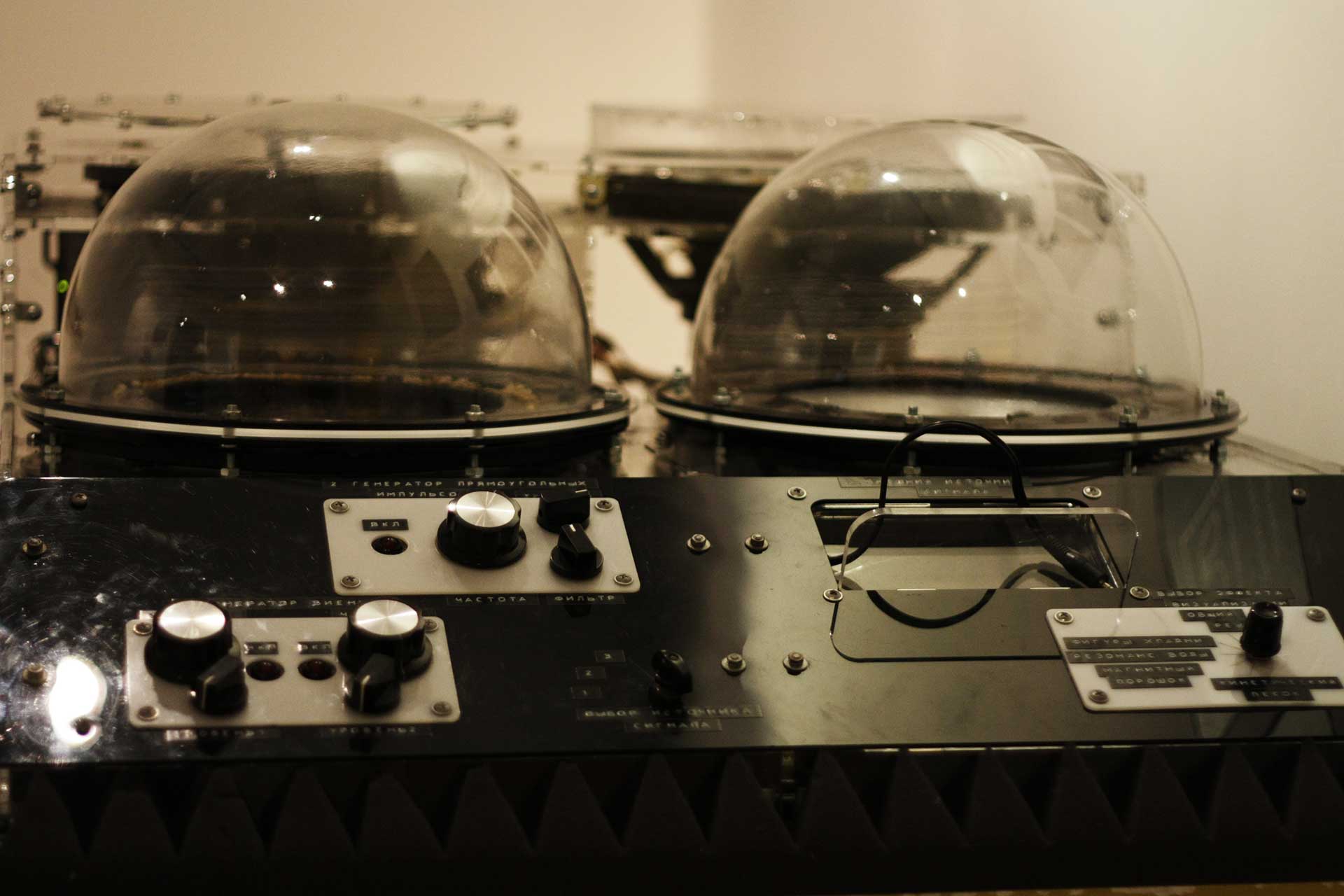 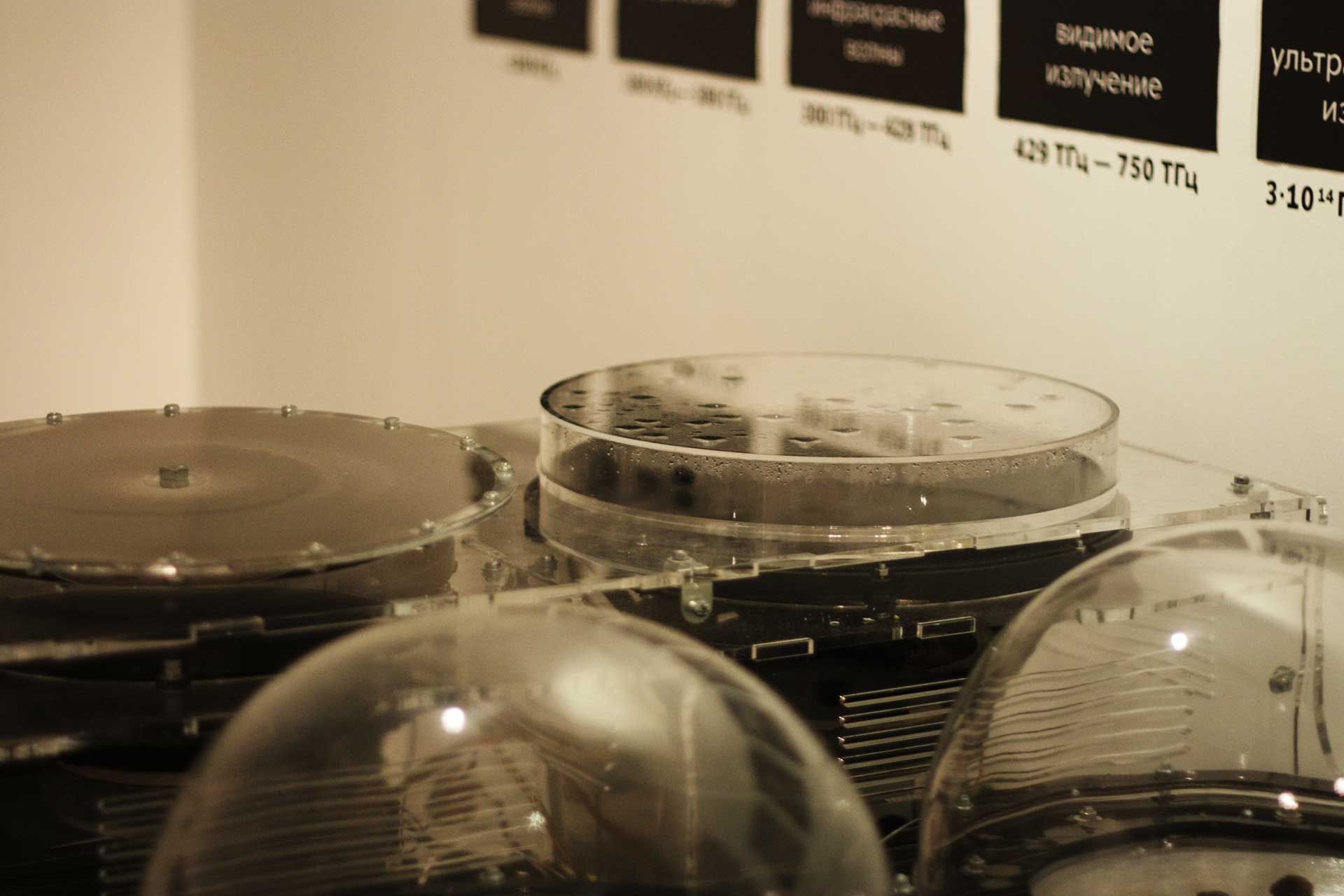 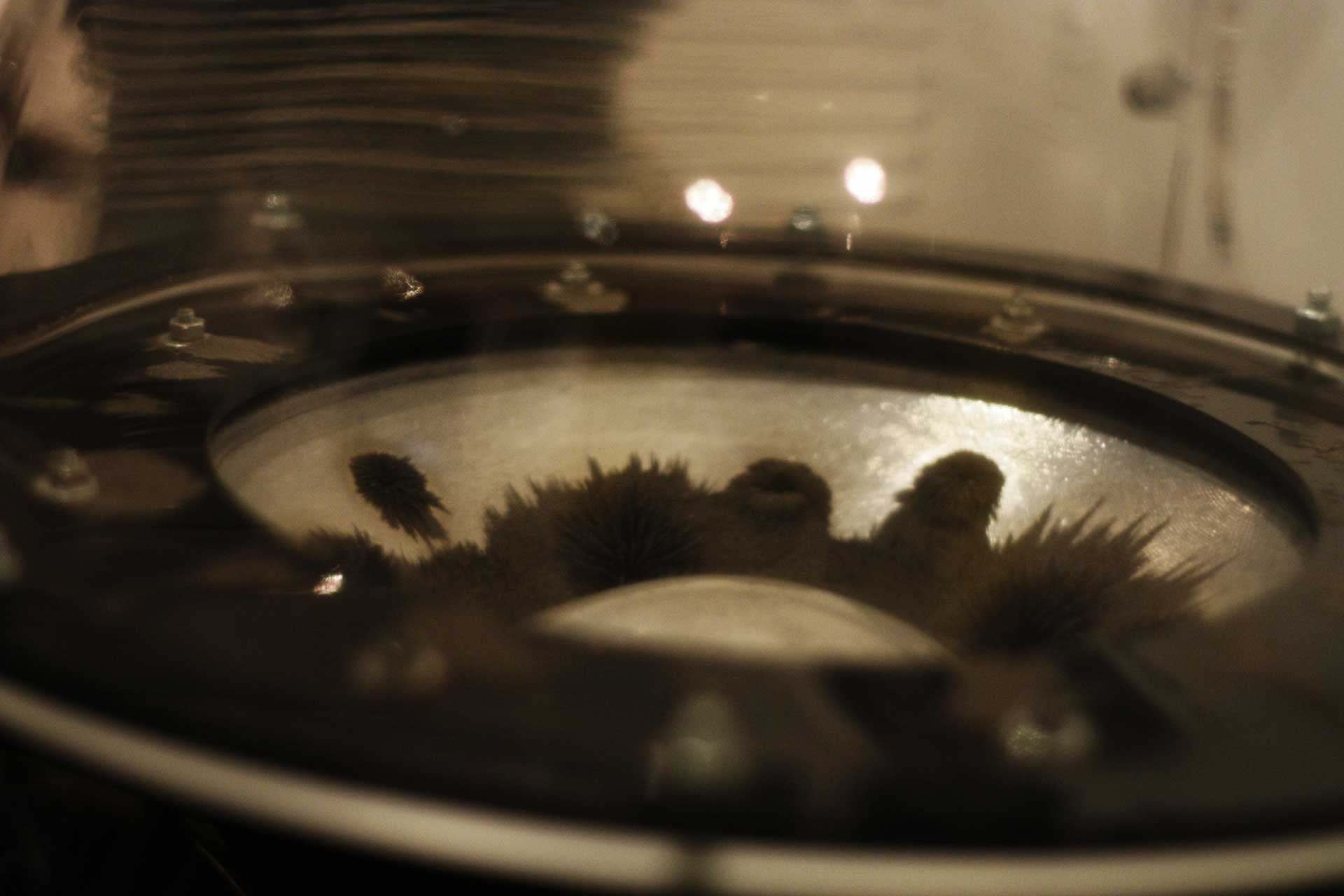 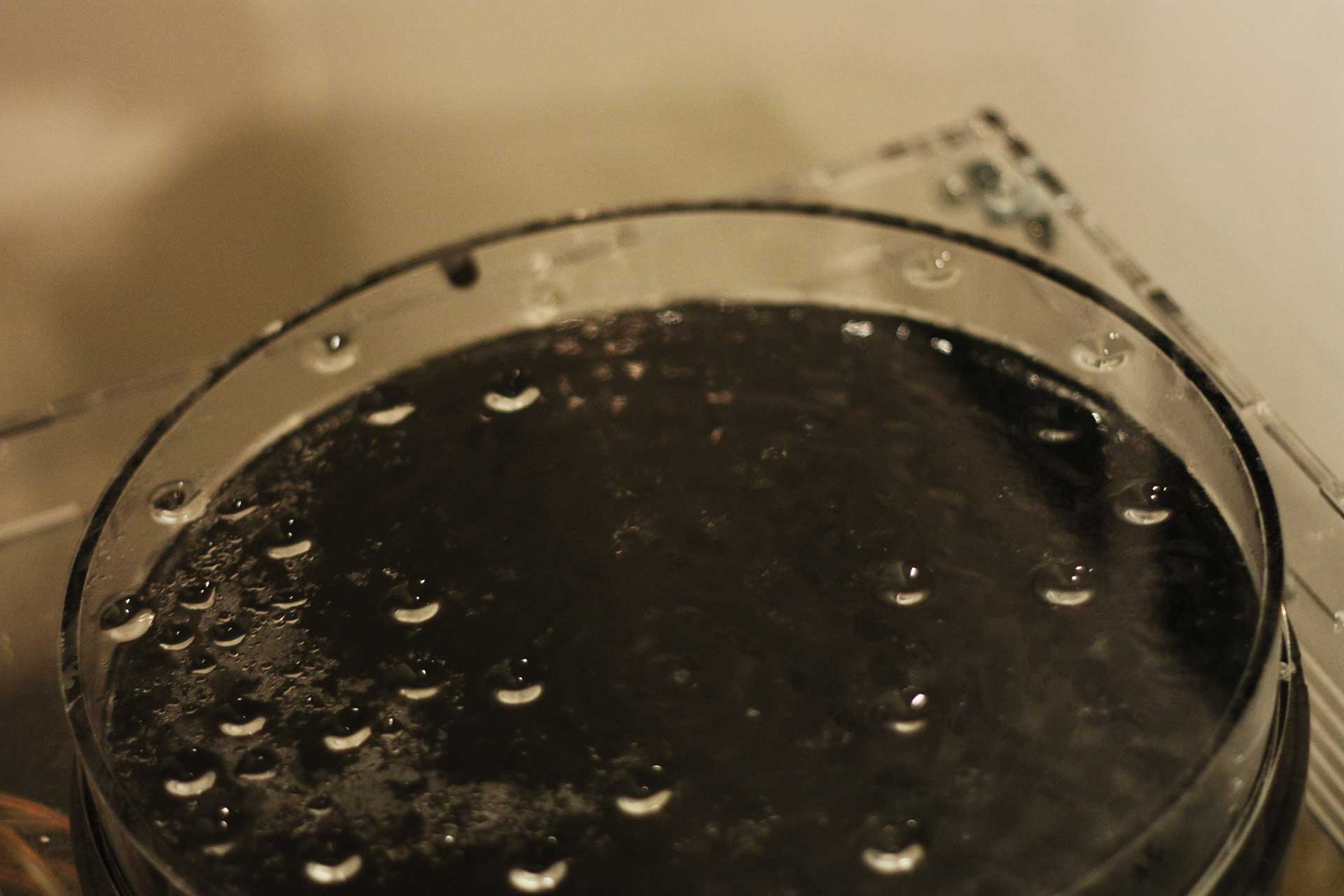 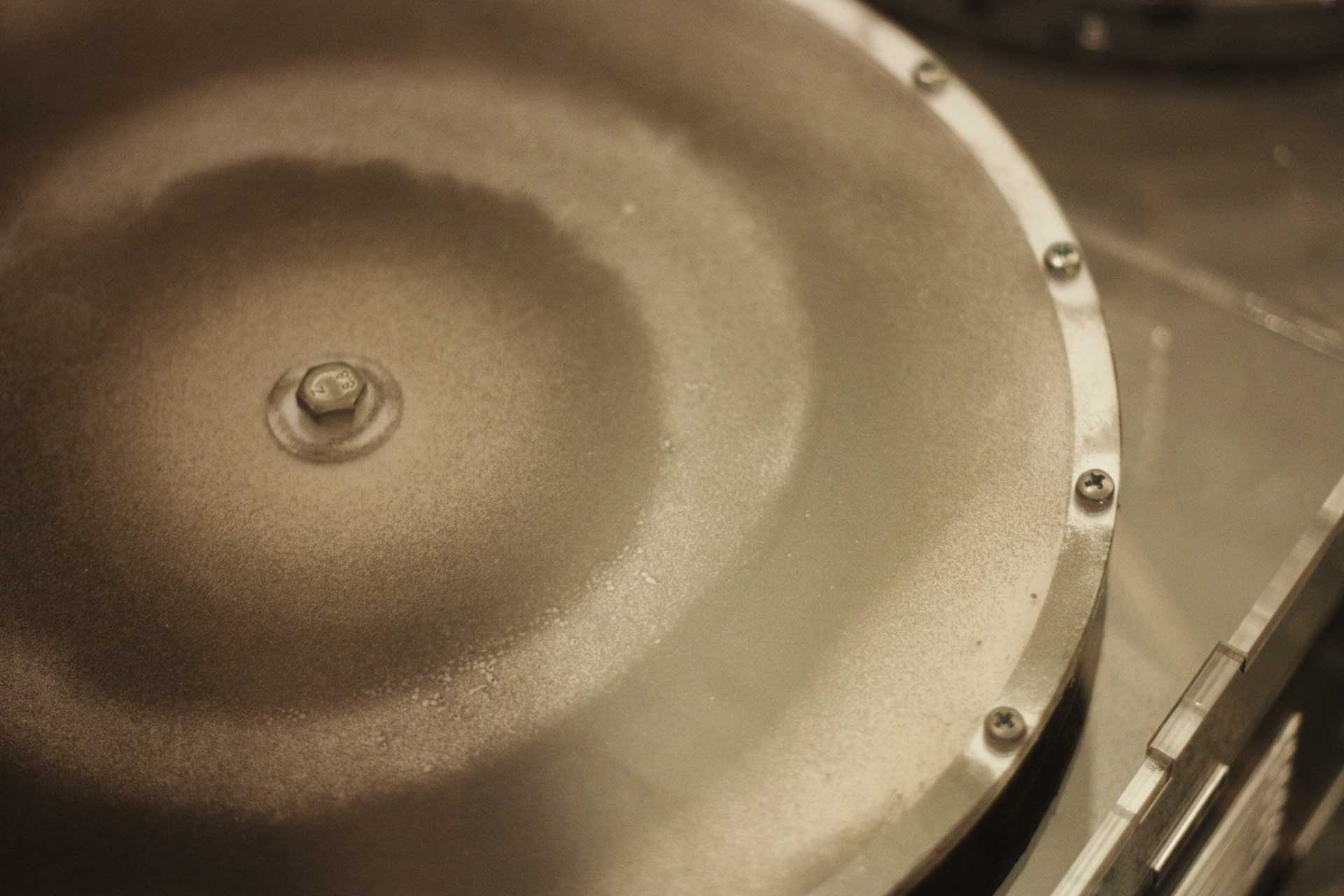 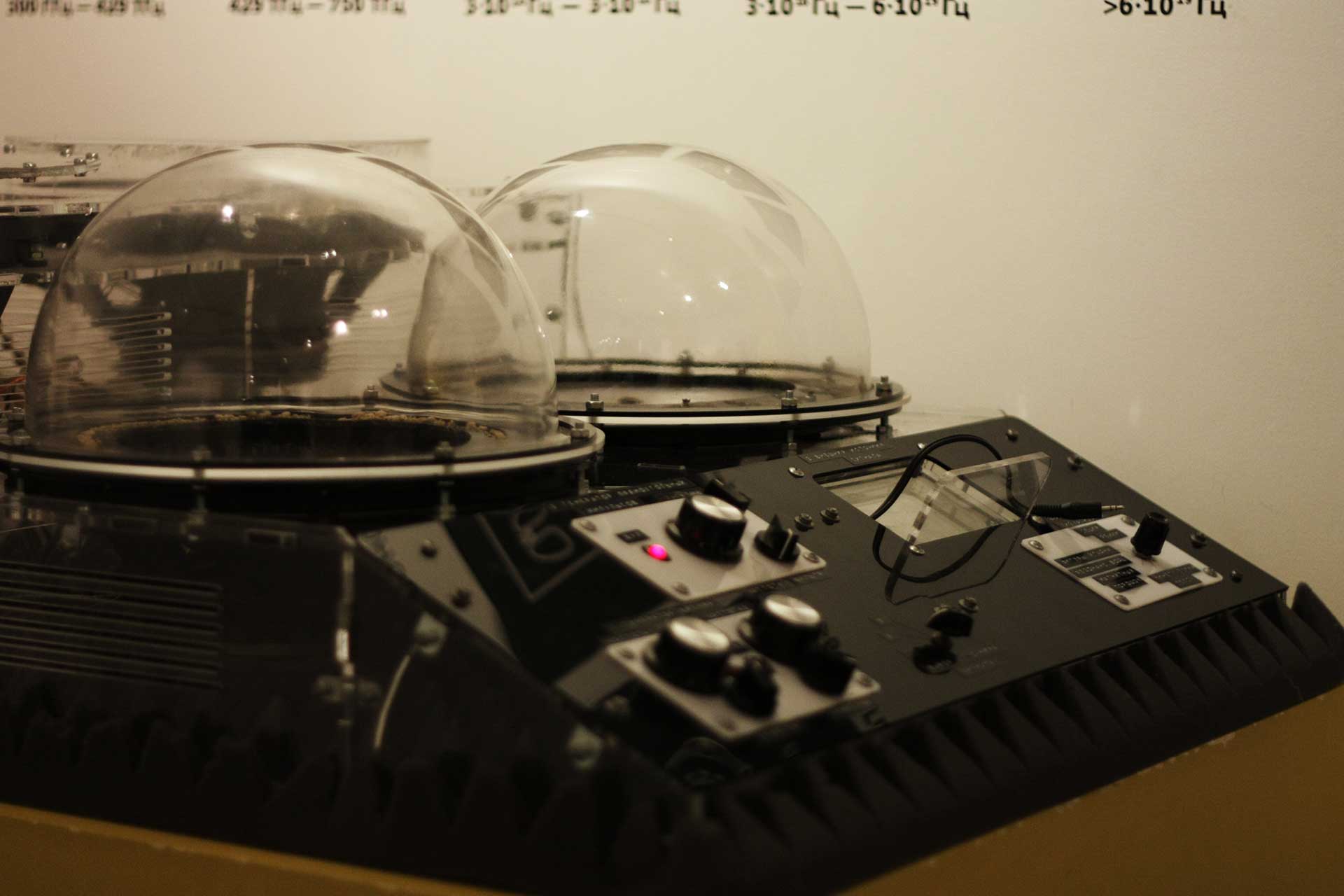 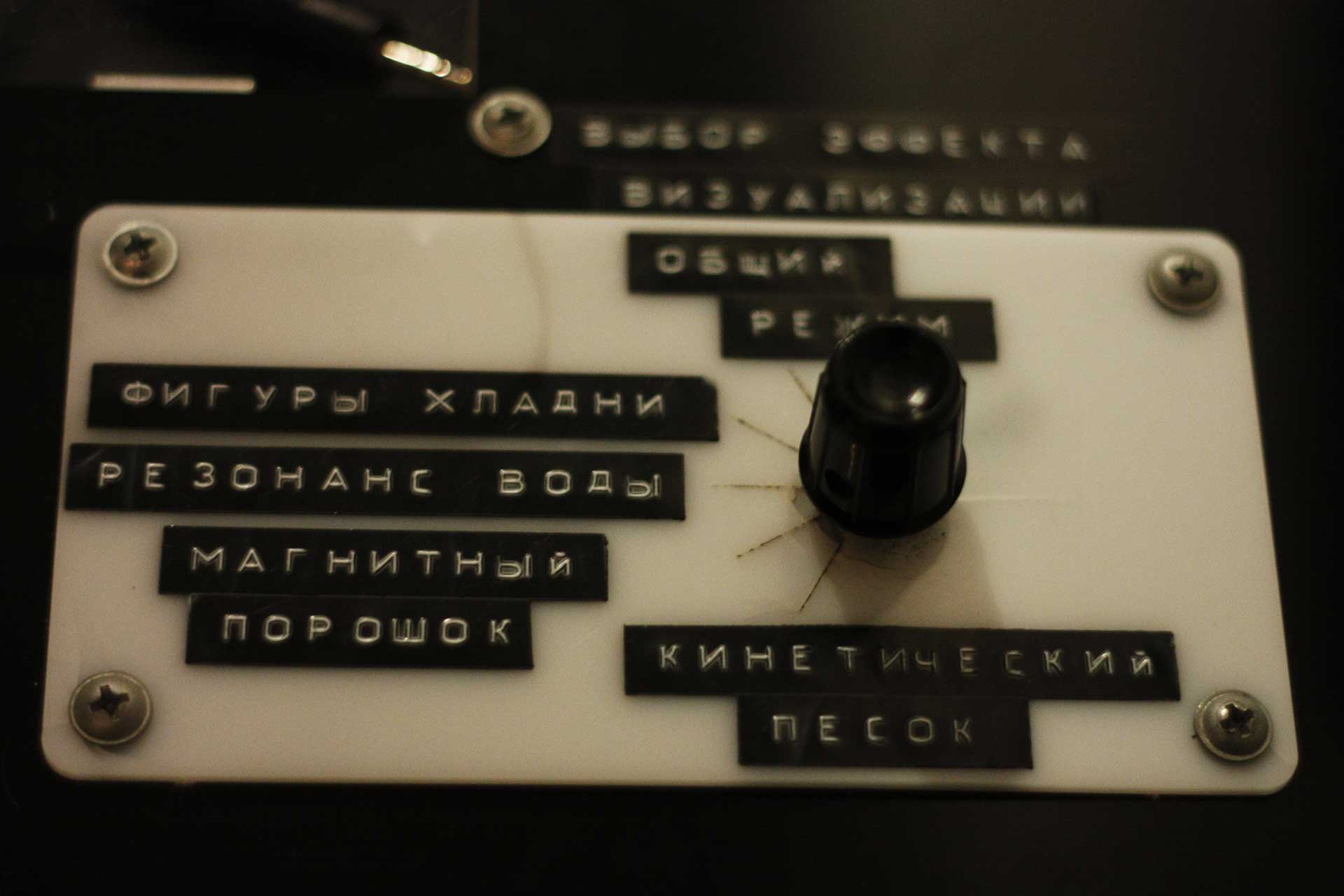 "Phonovision" is an electroacoustic stand for electromagnetic waves of sound frequency visualization through acoustic. It demonstrates the physical nature of sound as a result of conversion of electromagnetic oscillations in the system into mechanical ones. Visualization is achieved by means of interaction of various materials with the vibrating membrane of the loudspeaker.

The stand contains two generators of sound waves of different shapes: a double generator of sinusoidal waves and a square wave generator with a low-pass filter and also allows the visitor to connect an external sound source like mobile phone or mp3-player. The signal chosen by the visitor is amplified and fed to one or more specially prepared loudspeakers for its visualization.

Part of the exhibition "Sound And ...", State Museum of Musical Culture, Moscow (since 2016)

"Ultrasonoscope" is an apparatus for detecting the ultrasonic waves effect on liquid media. It demonstrates the physical impact of inaudible sound oscillations.

It has three independent ultrasonic generators and cylinders containing aqueous suspensions of different volumes and concentrations. Ultrasonic wave propagate trough the liquid medium and form the standing waves that change the view of the suspension.

The visitor can choose the power of ultrasonic signal using the dashboard to observe the various ultrasonic effects on the media.

Part of the exhibition "Sound And ...", State Museum of Musical Culture, Moscow (since 2016) 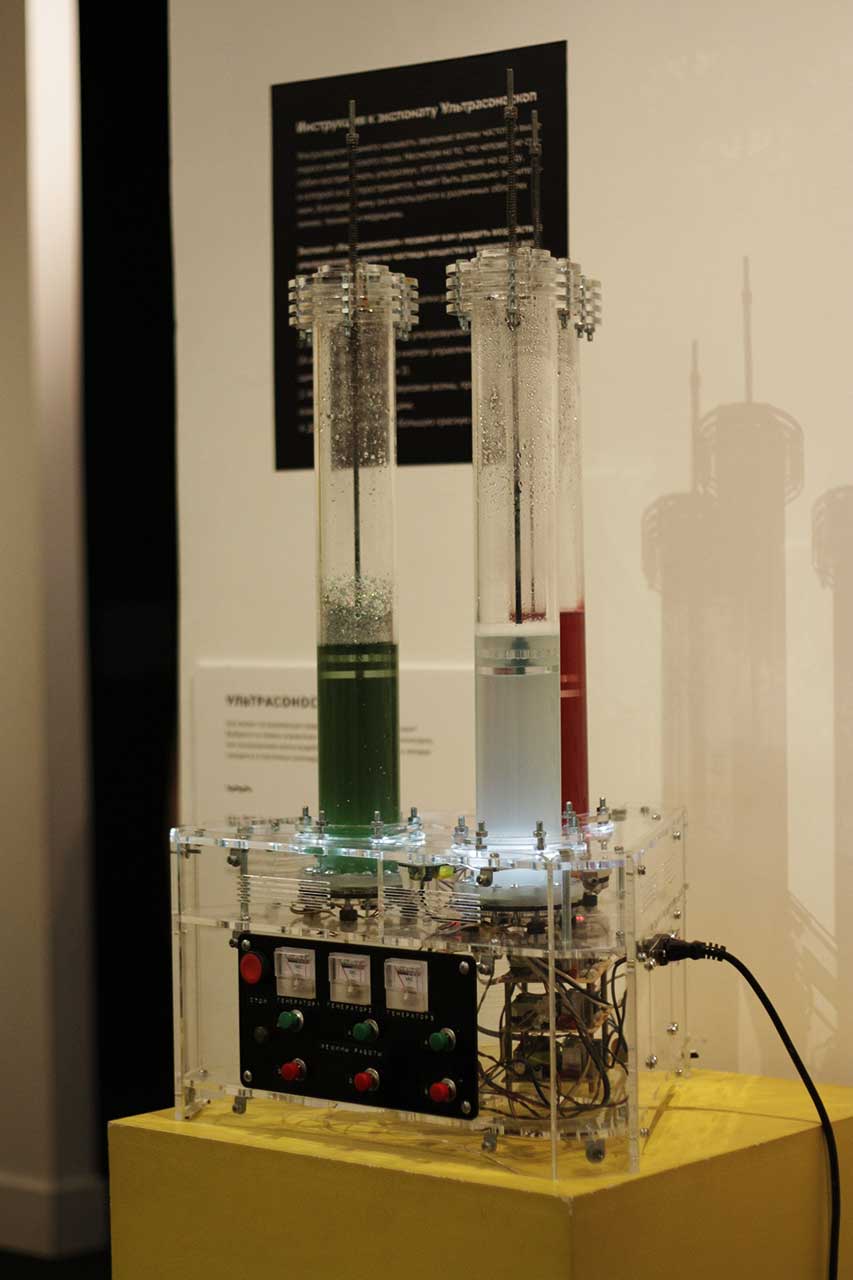 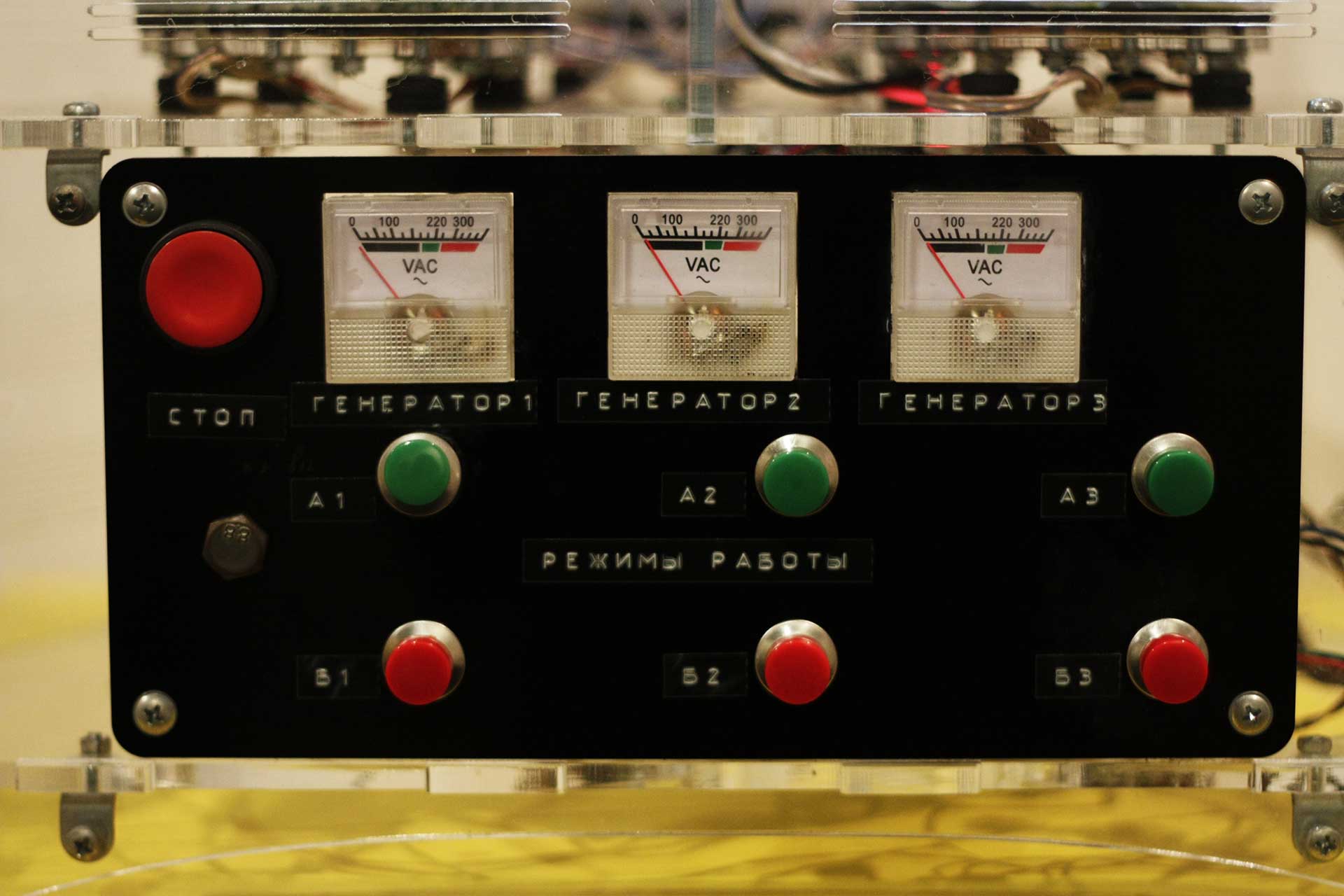 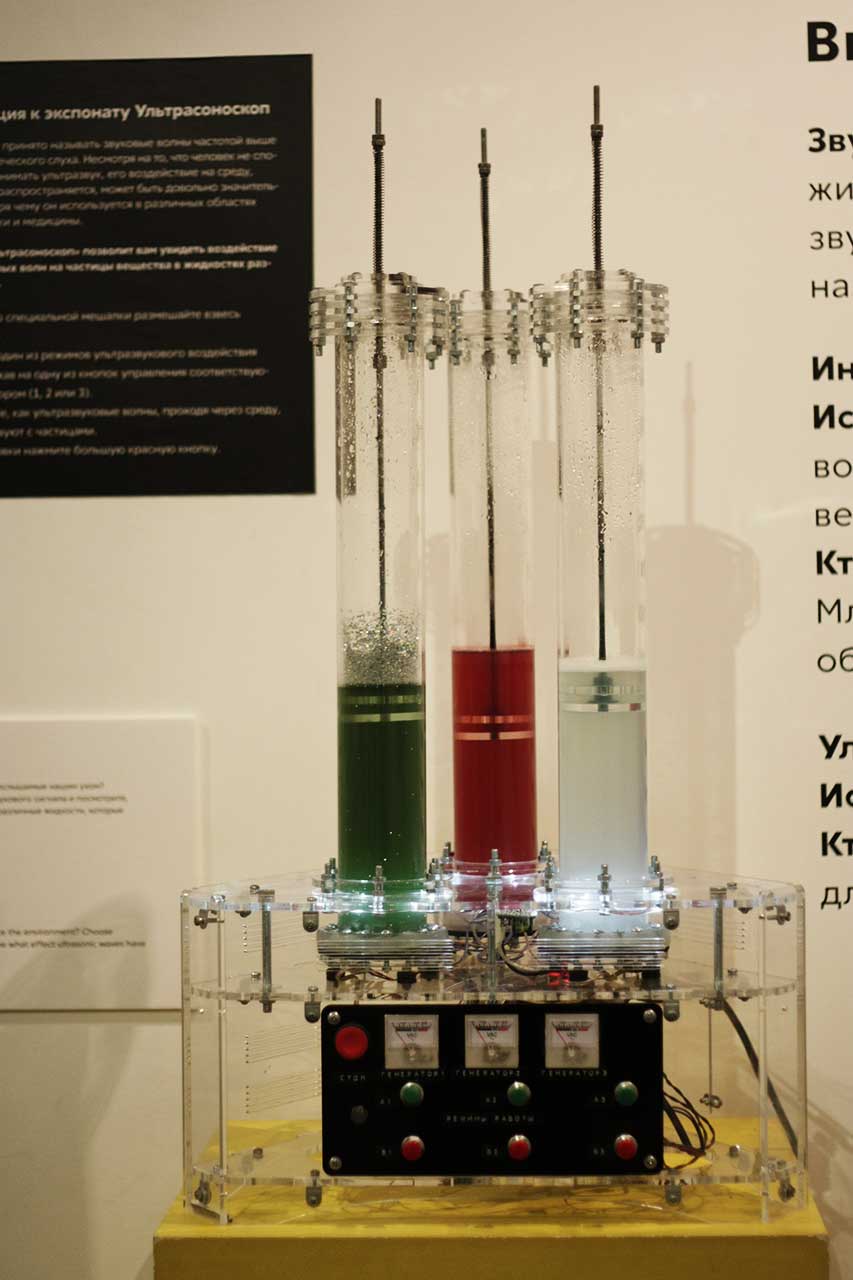 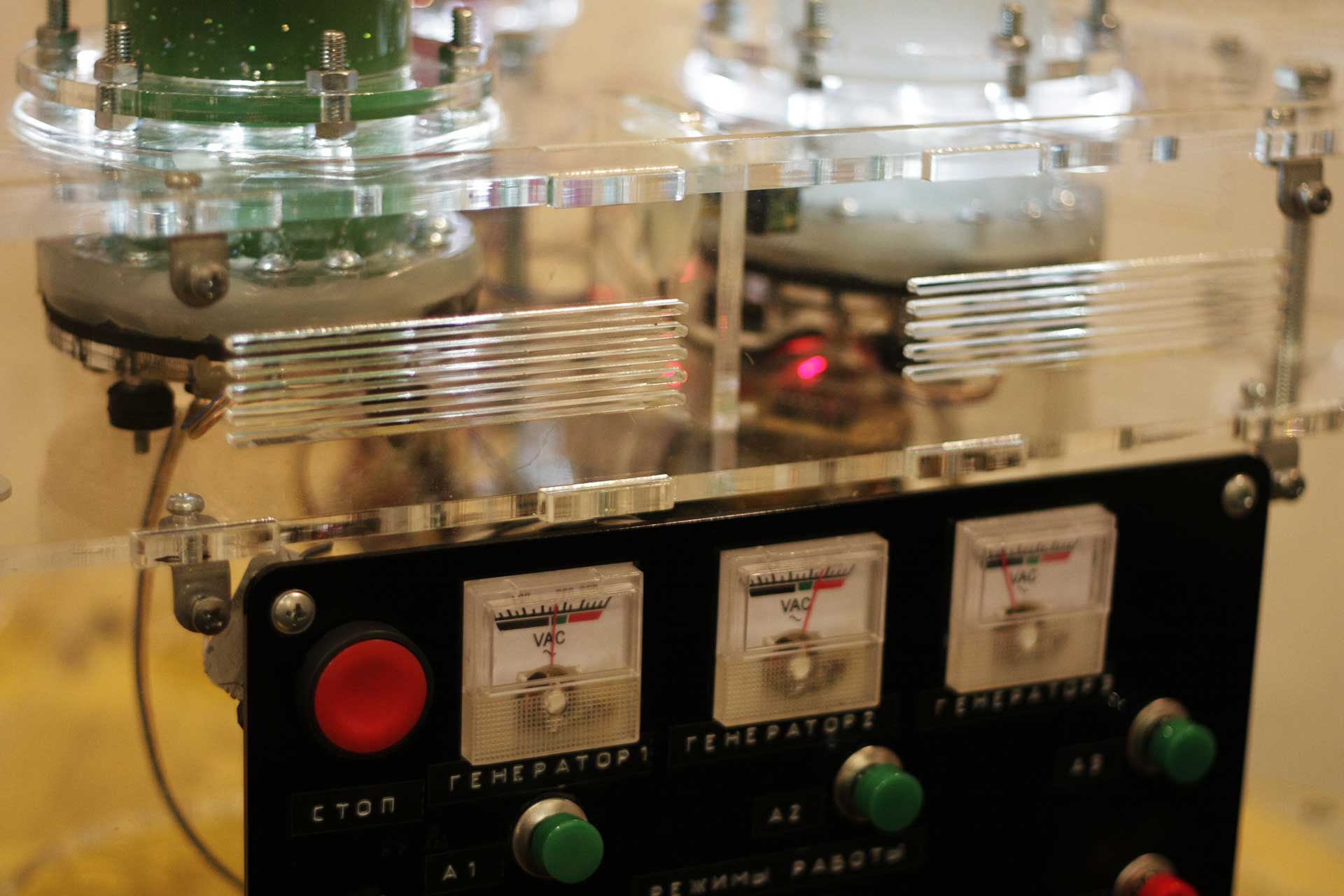 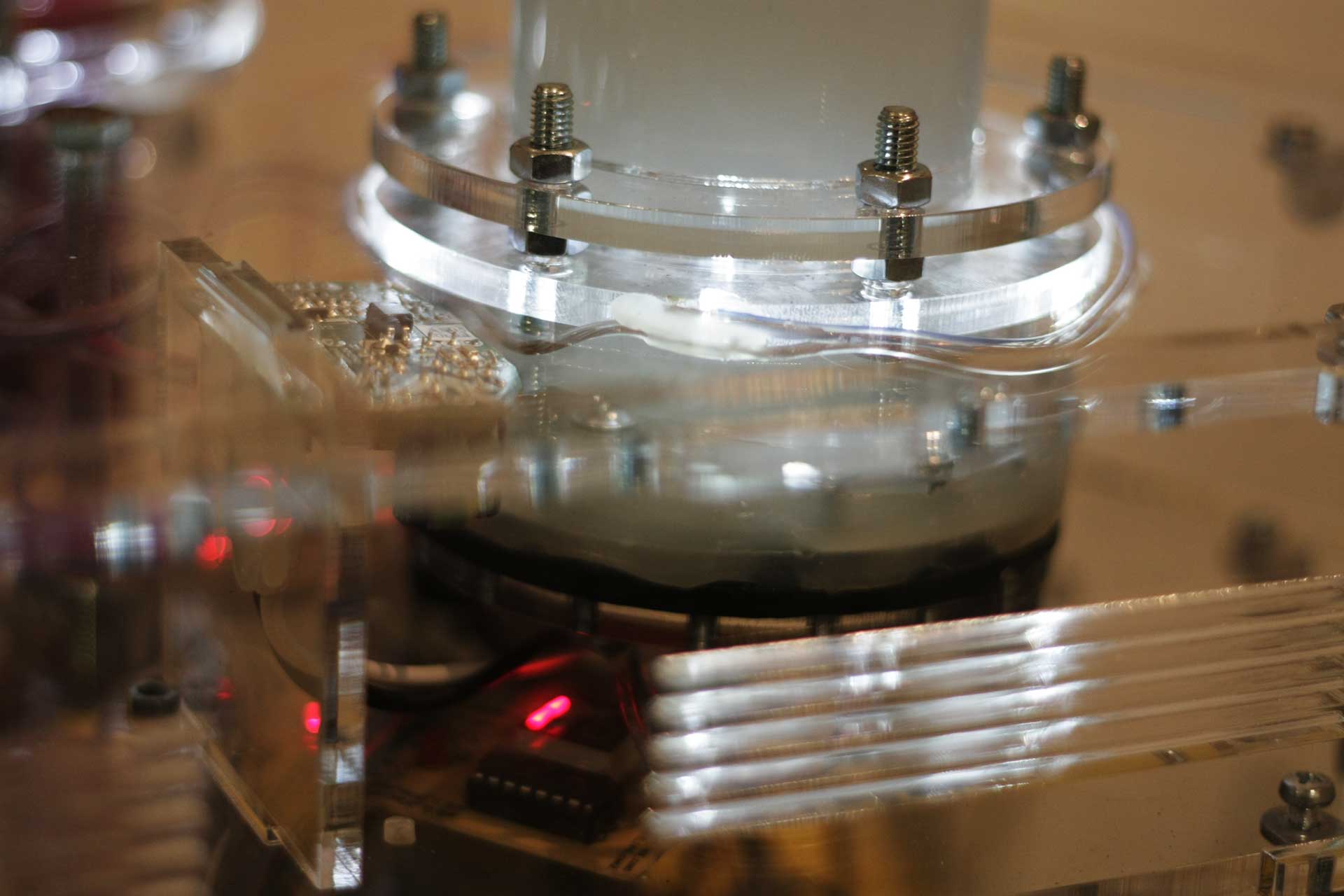 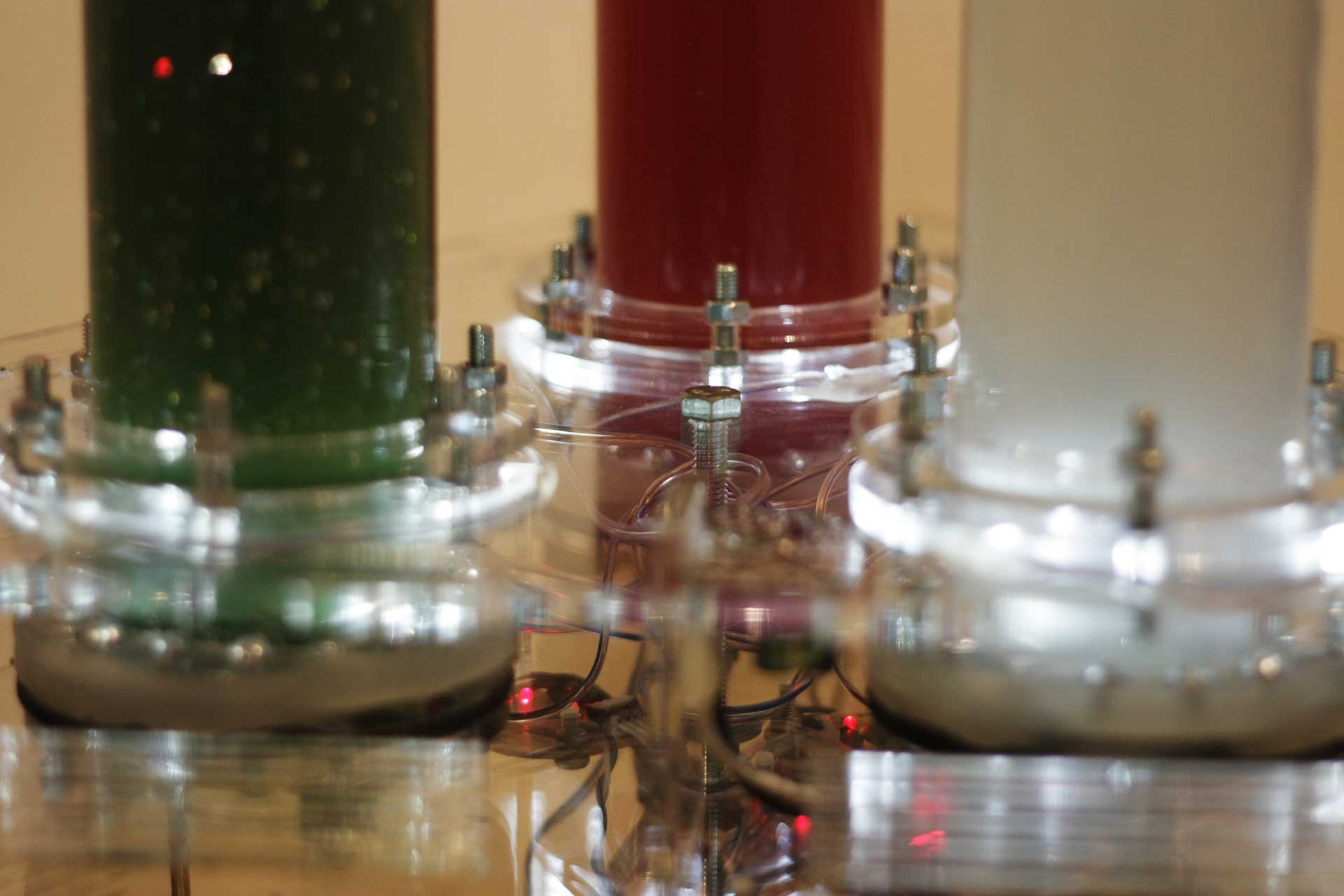 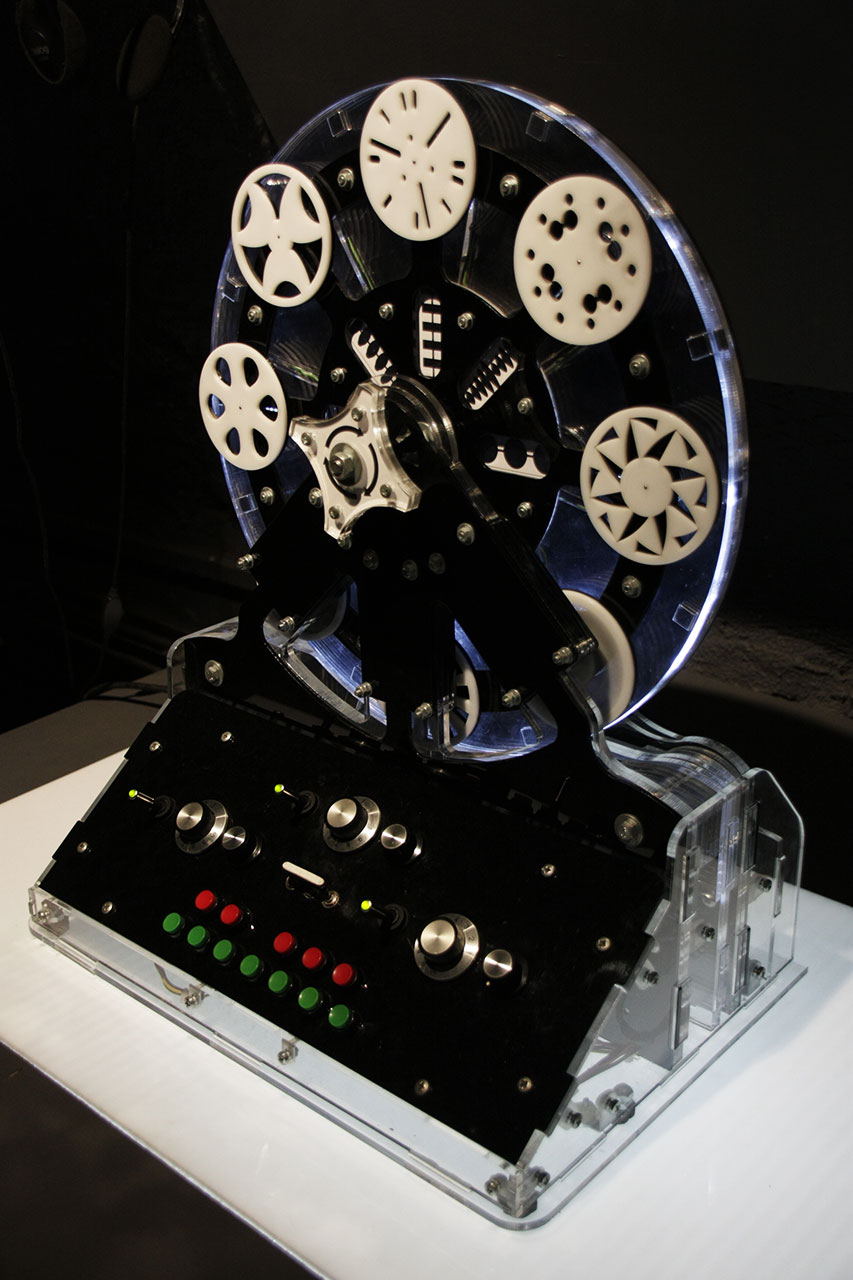 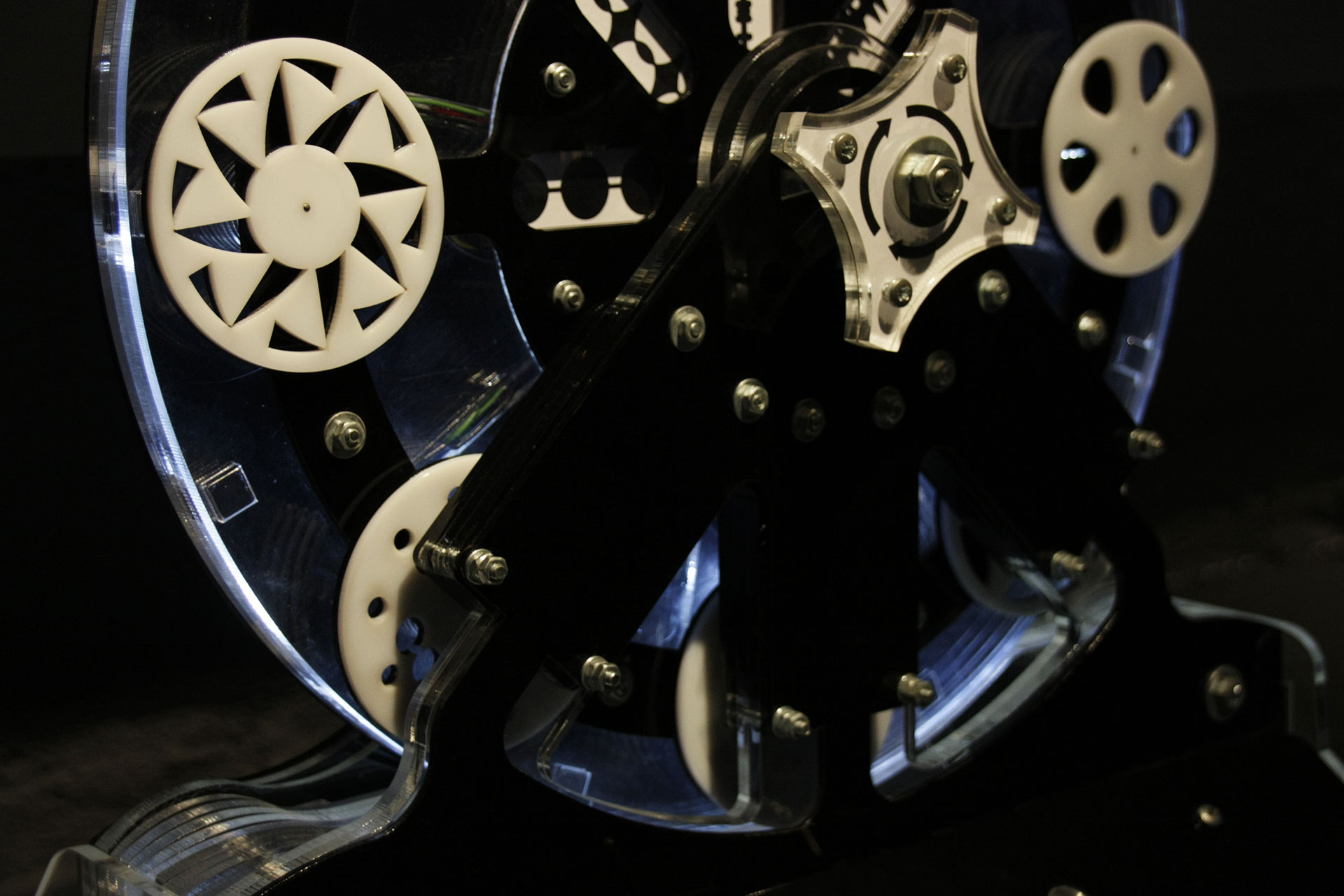 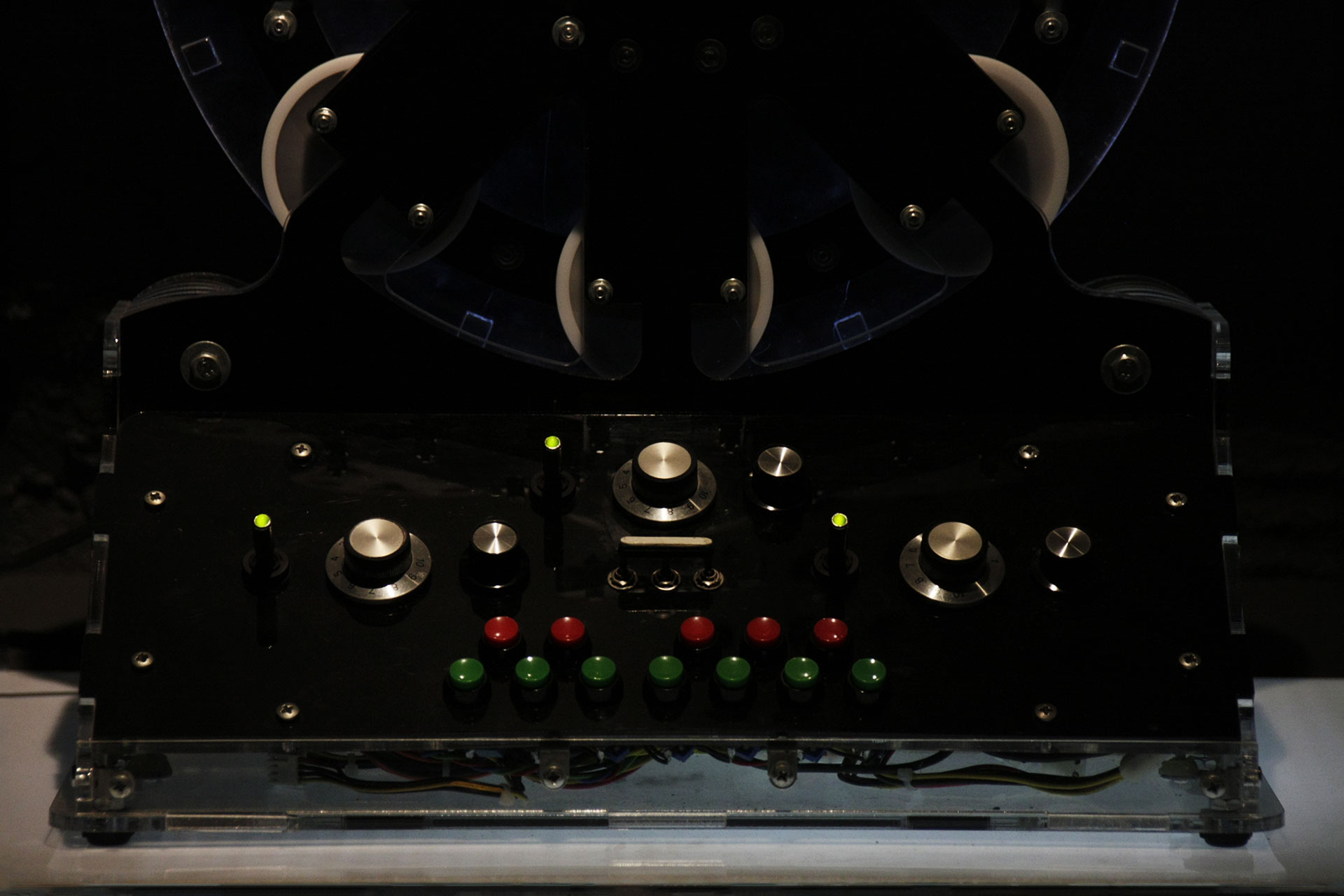 "Variotone" is a three-voice optomechanical synthesizer built on the principles developed by Eugene Sholpo in the 1930s at the Leningrad Graphic Sound Laboratory. The use of several disk modulators restored by archive photos and direct conversion of the modulated light into sound let us to hear the sounds of the original "Variophone" from Lenfilm studio. One can get his own unique timbre by combining different modulators with flexible settings for frequency and loudness for each oscillator and using the microtonal keyboard possibilities.

Part of the Saint-Petersburg Sound Museum exhibition (since 2015)

By means of special software, the whole city is divided into sound zones corresponding to small topographic units - a blocks, parks, avenues, streets, yards, railway stations or churches, which are then combined as the "sound puzzle" creating a model of the urban phonosphere. Resulting sound map exists independently of the listener and gives the impression of real time listening. When listener passes through the same zone, he perceives different phases of the recorded soundscape.

The choice of the listening area can be done only by slow moving around the city map and thus laying the route of a virtual sound excursion around St. Petersburg.

Part of the Saint-Petersburg Sound Museum exhibition (since 2015) 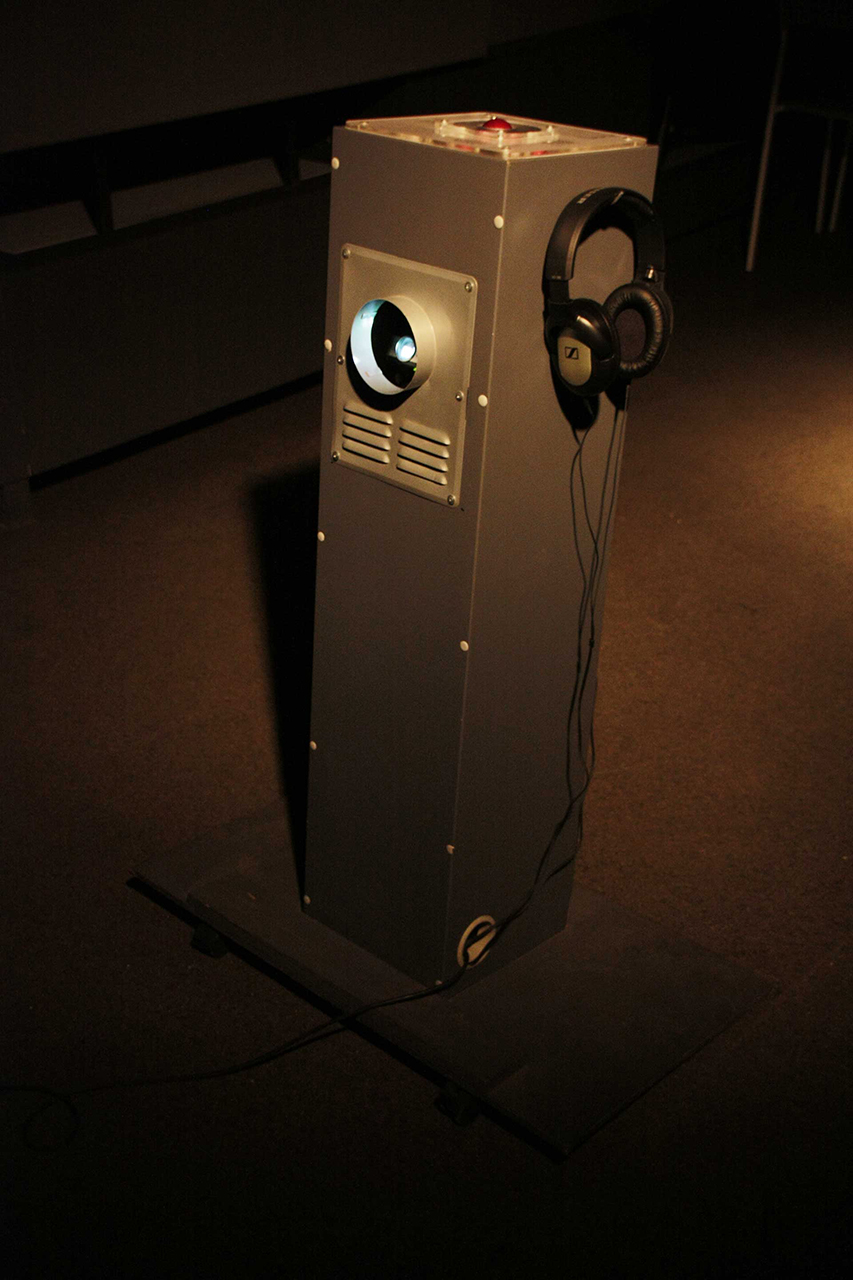 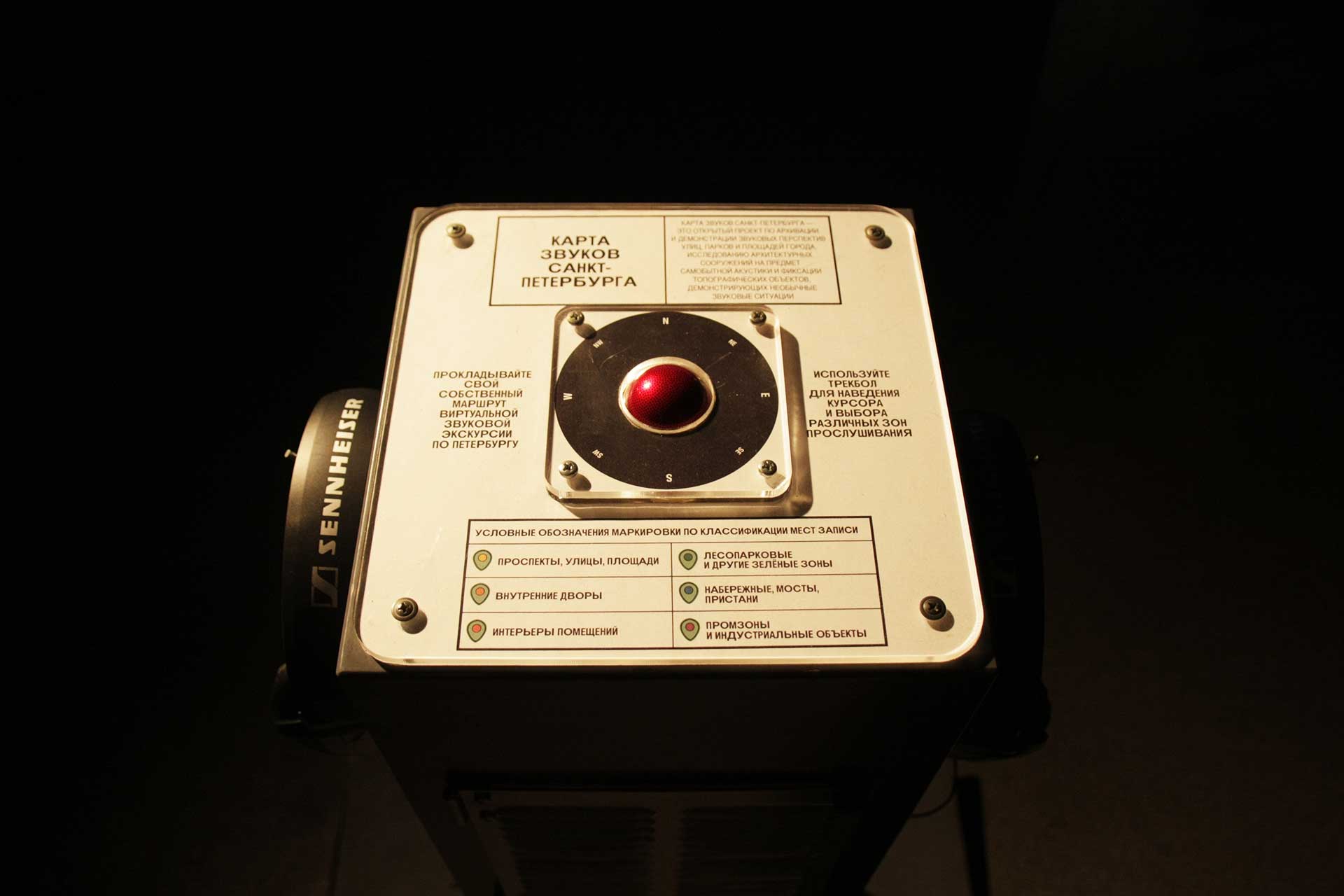 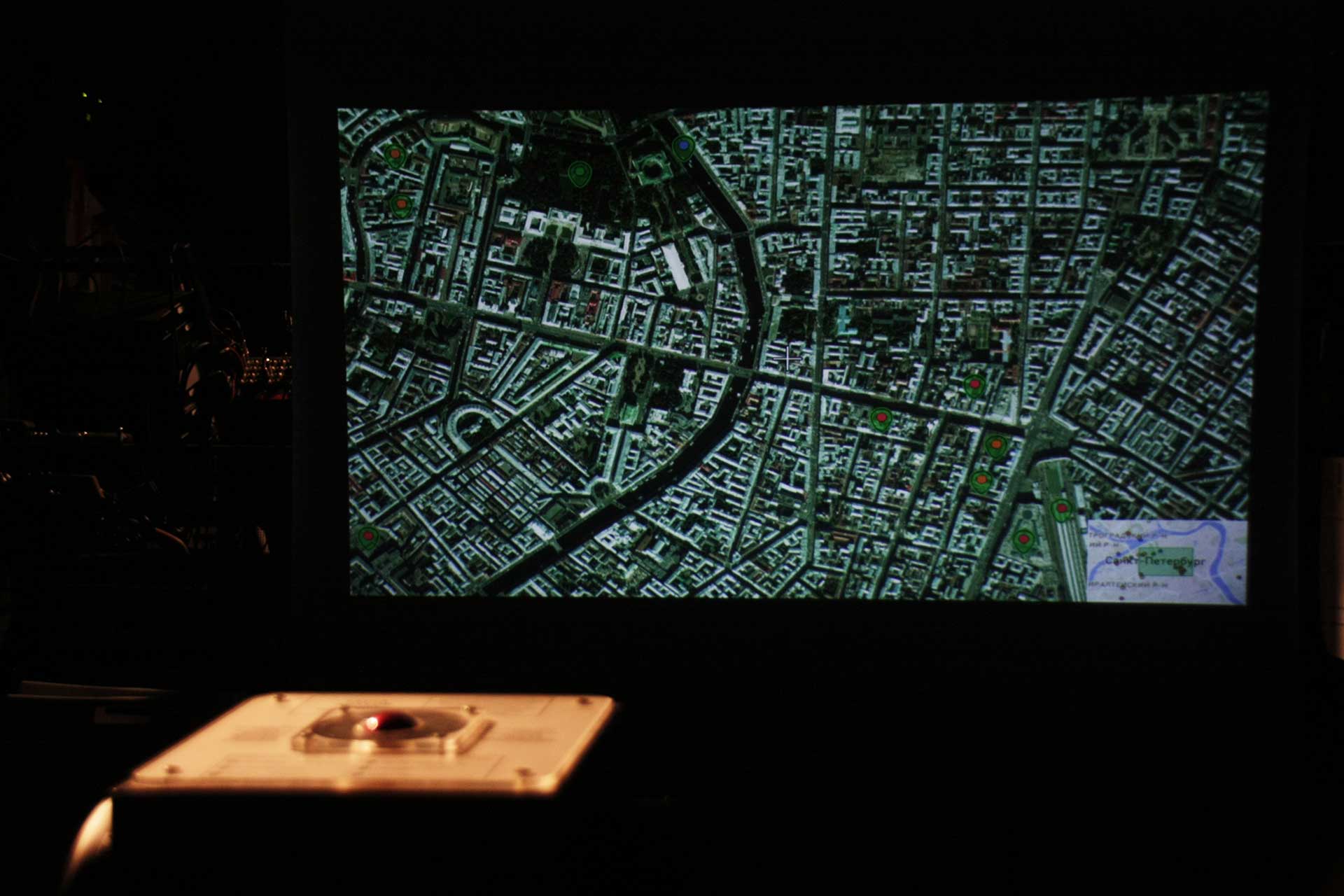 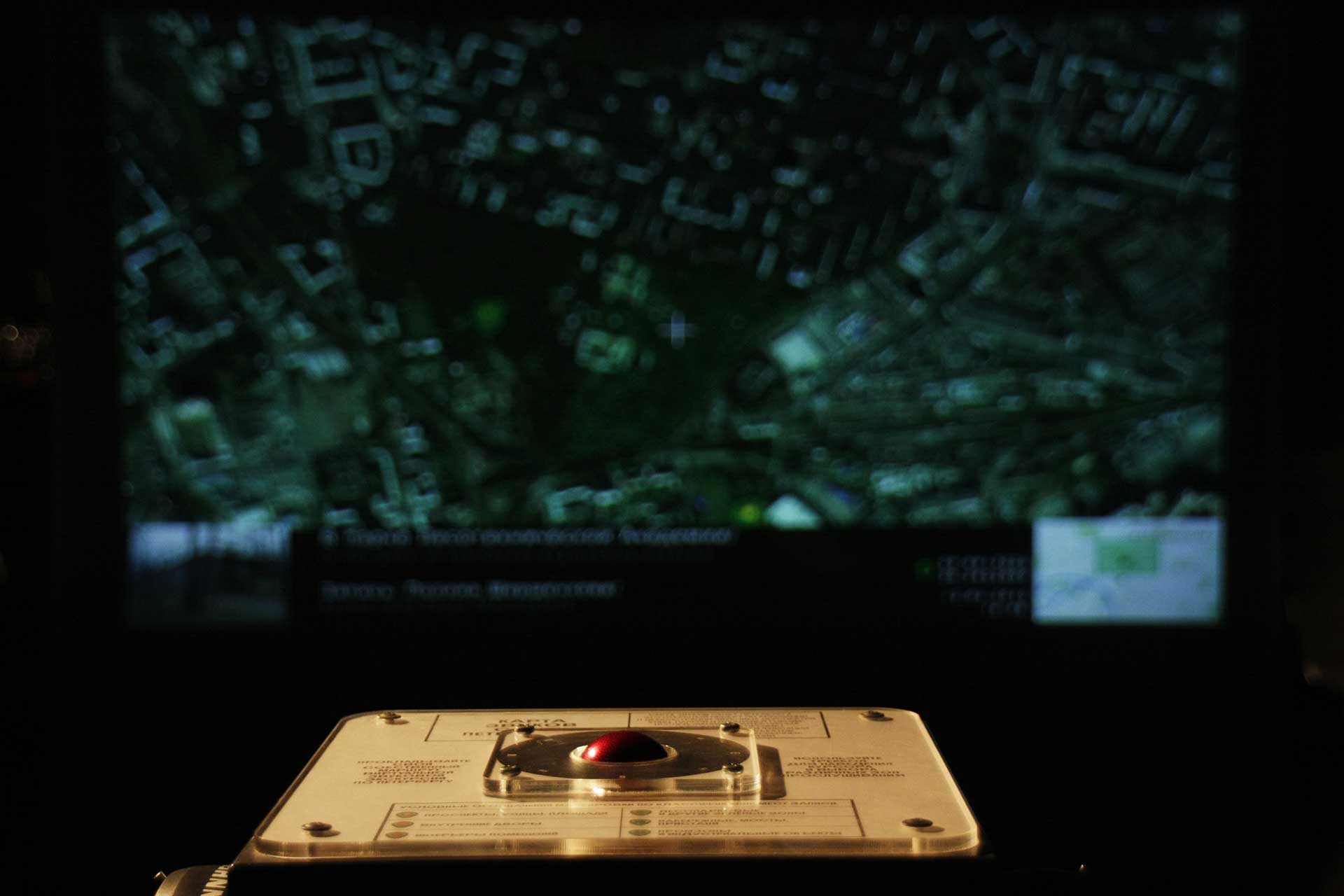